Some friends and I recently qualified for the final of the 2017 edition of the Data Science Game competition. The first part was a Kaggle competition with data provided by Deezer. The problem was a binary classification task where one had to predict if a user was going to listen to a song that was proposed to him. Like many teams we extracted clever features and trained an XGBoost classifier, classic. However, the one special thing we did was to subsample our training set so that it was more representative of the test set.

A shift in the test set distribution can occur for many reasons. For example when Facebook split it’s messaging system to a new app called Messenger the average time people spent on the main app probably decreased by a lot, but it probably also didn’t impact churn, quite the contrary I imagine. Shifts like these can occur through time and make part of historical data useless after a while. In the case of the Deezer competition, we had a feature which measured the number of songs a user had listened to up to when the listen occurred. This feature was on average lower than in the training set. In both datasets the data followed an exponential distribution but it was more accentuated in the test set. After subsampling the training set so that this particular feature had the same distribution as in the test set we gained a few percentage points in ROC AUC and climbed the ladder by around 20 spots.

Here is an example of what the difference in distribution looks like. Here and in the rest of the blog I’ll use KDEs to represent distributions. 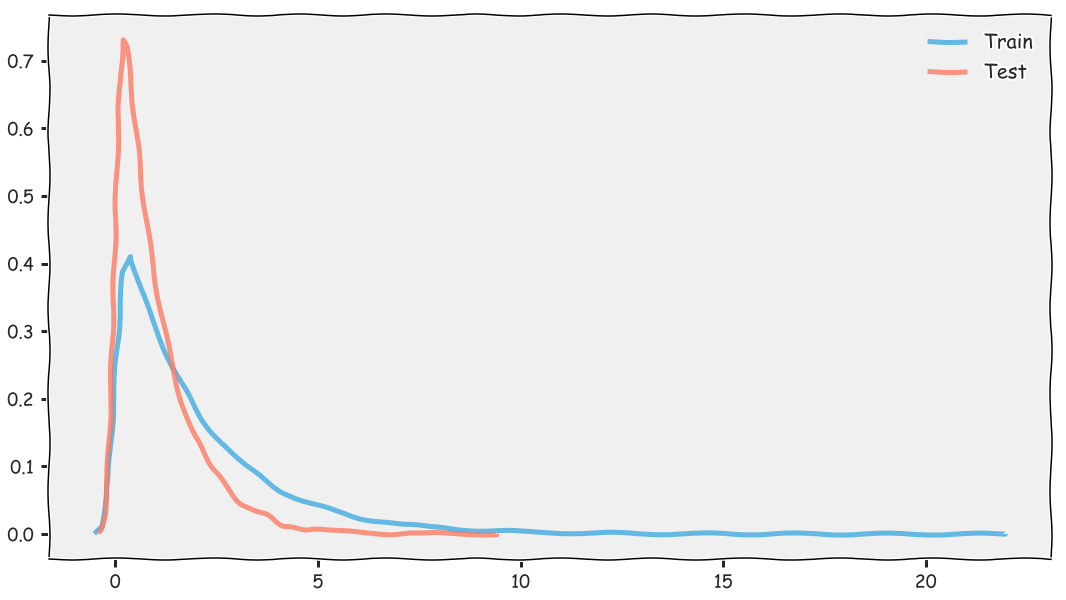 The algorithm that follows should be quite straightforward and is quite fast.

The algorithm has two parameters which are the number of bins ($n$) and the size of the subsample ($k$). To generate the equal width bins we can use percentiles.

Now to the code, in Python of course! 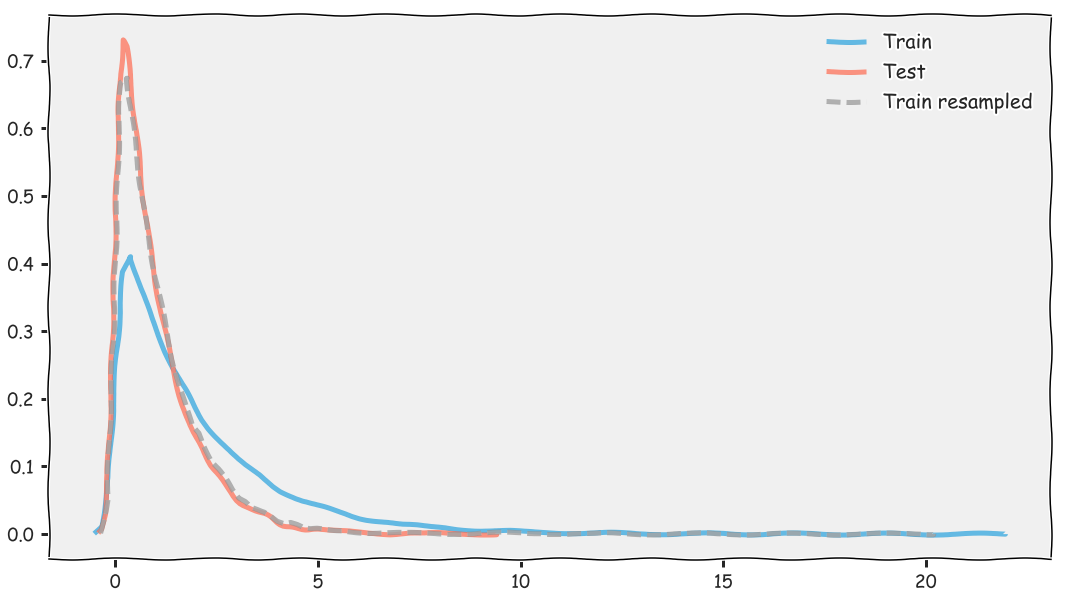 You can see that the subsample (the dashed line) has a similar distribution to the test set (the red). This is exactly what we during the competition. Our initial dataset had around 3 million rows and we actually used a subsample of 1.3 million rows. Less data but more representative data! The number of bins that you use doesn’t matter too much in my experience, and the lower that number the faster the algorithm runs. As for the size of the subsample, the less your training set and test set distributions are difference, the less you will be able to subsample - at least if you are doing it without replacement, which is the only way that makes sense if you don’t want to have duplicates.

I added the subsampling algorithm to my data science package called xam. The next step will be to generalize the weighting and subsampling to multiple dimensions, but that’s for part 2 because I haven’t figured it out yet!